Roxana Saberi released, but one local woman remains in Iran

Posted on May 12, 2009 | Comments Off on Roxana Saberi released, but one local woman remains in Iran

Arrested last October while she was working on her thesis documentary project about the women’s rights movement in the Middle Eastern country, Momeni was held in solitary confinement for two and a half weeks until she was released from Evin prison, the same jail Saberi was held.   Initially, government officials said there were “no obstacles” keeping her from coming home, but it quickly became clear that this was not true when Momeni’s family said the student’s passport had been siezed.  Later, Iranian officials said a travel ban had been issued against Momeni, and that she would be charged with “acting against national security.”

Momeni had been recording interviews with volunteers of the One Million Signatures campaign, an organization that seeks to amend Iranian law to recognize men and women as equals, for her documentary.  At the time of her arrest, she had been pulled over on a highway for allegedly passing another car illegally.  Momeni was then escorted home, where her computer, video footage and other personal belongings were confiscated.

Her fiance, Hassan Hussain, has worked relentlessly for her release.  “I don’t know what to do,” he says, adding all he can do is “hold on and keep trying.”

Hussain says he does have some hope the new Obama administration will help the process of Momeni’s release, but with Iranian elections coming up in June, he adds that the Middle Eastern country’s government might be more preoccupied with a new administration’s transition than mending relations with the U.S. by allowing Momeni and others like her to return.

For those interested in helping Esha Momeni return home, a petition is available to sign electronically: http://www.petitiononline.com/EshaM/petition.html.

Comments Off on Roxana Saberi released, but one local woman remains in Iran 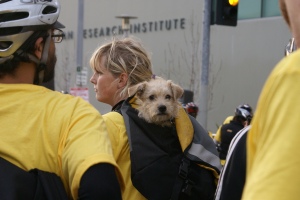 A biker brings her furry friend along to ride with Lance Armstrong in Hollywood.

I bicycled with Lance Armstrong last night.  It was short and sweet: a two-mile ride on Sunset Boulevard in Hollywood.

But there’s more to the story.  It started out with a tweet from the cycling champ on Feb. 28: “Hollywood March 7th.  Group ride.  Let’s go!”  A few more tweets revealed that the ride would meet at the Children’s Hospital and that cyclists should “be in position at 5:30, ride 6.”  Yes, Lance Armstrong did just invite all of his Twitter followers to roll with him.

About 500 other people – families, high school track & field teams, Twitters and bike enthusiasts – showed up the pedal with the seven-time consecutive Tour de France winner, who announced his return to cycling at the event (which was also sponsored by a big-name sporting shoe company).  As a participant in late-night social bike rides (“subversive” is the term one of my professors once used, but some would just call it “fun”), it’s not every day that the City of L.A. closes off a major street like Sunset for a couple hundred bikers, marathons excluded.  Normally bustling with Hollywood club-bound cars zipping through intersections, the only sets of wheels on Sunset came in pairs, at least for a good 40 minutes.

L.A. may be best-known for its culture of cars, but the city has some of the best places for biking, Armstrong told the crowd before leading them west on Sunset and up Vine Street to end at the Ricardo Montalbán Theatre, where an entire side of the building featured a Shepard Fairey mural of the rider.

END_OF_DOCUMENT_TOKEN_TO_BE_REPLACED

Comments Off on Lance Armstrong rides with L.A.

Artist and Bob Dylan fanatic Aaron Foster stands by his license plate piece of the musician. Foster hosted an inauguration party at his gallery on Melrose Avenue Tuesday night.

On election night, Aaron Foster stayed inside for the evening.

“I was at home by myself watching the news,” said Foster of that historic day in November 2008.  The artist  – who still hesitates to label himself as such – later thought, “What was I doing at home?”

The 36-year-old San Francisco Bay area native, who said he was “totally obsessed with the elections,” decided come Jan. 20, he wanted to celebrate the occasion with others.  He held an inauguration party at his Melrose gallery through political action group, MoveOn.org.  (Click on the jump for more, including photos)

END_OF_DOCUMENT_TOKEN_TO_BE_REPLACED

In the meantime, a couple of reposts while the gears start working

While I get back into the groove of things, here are a few of my posts originally published on CSUN Scene, a blog maintained by my fellow journalism classmates as part of a class.

Missile radar sites surround L.A. as part of the city's efforts to protect itself during the Cold War

L.A.’s “Ring of Supersonic Steel”: The City of Angel’s Cold War past can be revisited in the many missile radar bases in the surrounding mountains. This post takes a look at the radar site off Mulholland Drive.

Where the wild things were: In 1956, Los Angeles got a new zoo. Instead of bulldozing the old one, which had already been falling into dilapidation, they simply cleared out the cages – most of the animals had already died from malnutrition anyway – and left it there. The site of the original zoo is now a picnic area in Griffith Park.

Lincoln Heights Jail’s current (and past) inhabitants: The old prison has a rich history… The site had been used to house prisoners since the days of the Gold Rush until and was “used as a drunk tank” up until the 1960s, according to arroyoartscollective.org, and is a favorite in Hollywood as a filming location (The movie, “A Nightmare on Elm Street” shot scenes in the jail’s basement). And just like any old building with a past, it’s supposedly the home of the spirits of its past inhabitants.

Found: Art at Moorpark & Laurel Canyon: Outside a Top Thai Massage in Studio City is a makeshift art gallery.

L.A. Farmer’s Market through the pen of an artist: For two & 1/2 hours every other week, graphic artist and native Canadian Mark Kalesniko finds inspiration for his characters in the tourists and regulars that flow through the market.